As the middle child between an older sister and a two-minutes-younger-than-me identical twin, I (Rebecca Gilmore) worked hard at garnering every ounce of attention I could get. Turns out, my most successful attention-getting tactic was wielding my wit. (My dad claims it was unsolicited teenage snark. Potato, po-tah-to.)

After years of working with nonprofits, higher education and marketing agencies, I came to some realizations. Even though I’d either dipped my toe in or plunged head first into a variety of industries, some crucial things always remained the same: I loved working with small, tight-knit teams, relished collaborating with other creatives to lead brands, and felt a thrill every time I put fingers to keyboard to write smart, concise (and sometimes snarky) copy.

Armed with those insights, I started Gilchek Creative so that I could have even more of what I enjoyed in my life. Now, more often than not, I get to work with amazing people as we pursue our passion projects together.

Life is more than just work, amiright? So when I’m not delighting in the challenge of character limits, you can find me consuming too much coffee with my husband, bingeing on sci-fi, visiting quirky museums, enjoying the Fort Collins geek community, and raising our feisty felines Eleven and Dax.

What’s in a date?

If you’ve received our first-in-a-series Gilchek Creative stickers, then you may have noticed that we’ve been around since Stardate 70017.1. And yes, it does represent a real date. But first, you have to scan through some extremely geeky history. 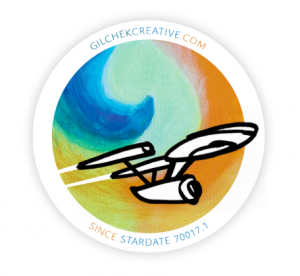 A Stardate is a fictional system of time measurement developed for the beloved television and film series Star Trek, and it precedes any log entry.

There is great debate about how you calculate Stardates because it varies for each series and Star Trek experience. So if you’re a fan of TOS (the original series), you determine them one way. If you’re a die-hard fan of the Star Trek Online game, you calculate them another way … and so on.

At the time I concepted this sticker (along with amazing graphic designer John Patzman of 1000 Robots Design), my husband and I were rewatching Star Trek: The Next Generation, so you can thank Jean-Luc Picard and his merry crew for the Stardate format I chose.

So, now for the big reveal: Gilchek Creative, LLC, was officially founded on July 20, 2016 at 12:34pm. I’d been freelancing for about six months already, so there’s nothing super special about that date other than this was the day I finally told the State of Colorado about my little side hustle and gave them some money.

And now you know way more about Stardates (and me) than you bargained for. If you don’t have one of these rare collectibles, let us know and we’ll make it so. (That is until we run out ‘cuz they’re awesome.)

♥ Want to know the origin of “Gilchek”? I’d be happy to tell you. But I require a strong cup of coffee before I’ll spill the beans. (Hint, hint.)